From The New York Times:

In their quest to rid cleaning products of toxic chemicals, consumer advocates have now set their sights on Tide, the best-selling laundry detergent. 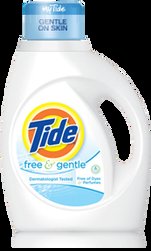 Last fall, the environmental groupWomen’s Voices for the Earth commissioned laboratory tests on 20 cleaning products and found what it described as problematic levels of 1,4 dioxane, a solvent, in Tide Free & Gentle (fragrance free) and Tide Original Scent, said Erin Switalksi, the group’s executive director. Smaller amounts of the chemical were found in Bounce Free & Sensitive (fragrance free), dryer sheets that are used to reduce static.

Small amounts of 1,4 dioxane are formed during the manufacturer of detergents, shampoos and certain drugs. The Environmental Protection Agency considers the chemical a probable carcinogen.

Ms. Switalski said her group had relayed its concerns to Procter & Gamble, the manufacturer, and that a group of advocacy organizations had done so as well, demanding action. “Tide Free and Gentle is marketed to moms as a healthier choice for babies,” she said, adding, “Our perspective is that it doesn’t need to be in there.”

But Procter & Gamble officials say that the levels of 1,4 dioxane in their products are minuscule and well within generally accepted safety guidelines. “We are many, many levels of magnitude below the levels that are considered any level of safety risk,” said Tim Long, a toxicologist for the company.

Procter & Gamble does not plan to reformulate the products based on the recent testing. However, Mr. Long said the company has been working for decades to reduce or eliminate even trace elements of 1,4 dioxane and other toxic chemicals in its products and continue to do so.

One difficulty is that the federal government has not published a definite limit for what constitutes a safe level of 1,4 dioxane in consumer products. In March, the Environmental Protection Agency identified 83 chemicals for further assessment under the Toxic Substances Control Act, and 1,4 dioxane was on the list.

In addition, the E.P.A. allows no more than 100 parts per million of 1,4 dioxane for a product to be eligible for its Design for the Environmentprogram, a labeling program intended to highlight safe cleaning and household programs.

Procter & Gamble official said the amounts were so low that they had not warranted the government’s full attention. They pointed out, for instance, that while the Food and Drug Administration has not set a limit for 1,4 dioxane, it considers current levels in cosmetics are permissible.

But Ms. Switalski said the uncertainty underscores why Procter & Gamble should remove the chemical from its products. “We don’t fully understand how much 1,4 dioxane is needed to give someone cancer,” she said, arguing that the levels might be different for infants and people who are sick. “For us, the bottom line is that Tide and Tide Free and Gentle are contaminated products.”

In the last several years, independent laboratory tests have become a common tool for consumer groups seeking to pressure the companies to reformulate consumer products.

In 2010, Procter & Gamble reformulated its Herbal Essence line of shampoos so that they carried no more than 10 parts per million of 1,4 dioxane, which company official said was part of an overall effort to reduce or eliminate the chemical from its products.

And last year, Johnson & Johnson said it was reformulating its baby productsto remove phthalates and to reduce 1,4-dioxane in baby shampoos.

We will keep you updated of any regulatory changes.